Facelifts are used to give a “refreshed” appearance to the face rather than address specific conditions such as sagging eyebrows, fatty deposits in the eyelids, or wrinkles around the mouth. Most commonly, a facelift addresses deflation or sagging in the cheeks, aging around the mouth, loss of jawline definition (jowls) and aging within the neck.

These conditions can be dealt with individually using other surgical means such a brow lift, eye lift and skin resurfacing. 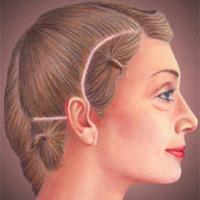 Before recommending an approach to your facelift, your plastic surgeon will assess:

If your hair is short you may want to let it grow to cover your incisions while they heal. If you are overweight. You should consider losing weight prior to undergoing facial aesthetic surgery.

For a facelift, an incision follows the contour of your ear, then extends around the earlobe and back into the hairline. Incisions are made in areas that are most easily concealed by your hair or with make-up. There may also be a small incision hidden underneath your chin.

After the skin has been pulled up and back, the excess is removed. In some many cases, deeper tissues may be repositioned. A small incision beneath the chin may be used to aid the removal of fatty tissue in that area and smoothing of the cord-like structures of the underlying muscle in the neck.

Possible though infrequent complications include:

Facelift incisions are most often inconspicuous though this cannot be entirely predicted due to individual patterns in healing.

Most people return to normal activities within two weeks. Since the healing process is gradual, you should expect to wait at least several weeks for an accurate picture of the way you will look.

Unlike a standard facelift, which primarily addresses sagging in the lower face and neck, the mid-facelift is beneficial for those who have early signs of facial aging in the area of the cheek below the eyes. However, mid-face lifting can be performed as part of a conventional facelift.

One approach is similar to a lower eyelid lift. Small incisions are made in the lower eyelid and the underlying tissue of the mid face is gently raised, about 90% vertically and 10% back. Any resulting excess skin is then removed.

Another method of performing a mid facelift involves making a small incision in the temple area.

These small incisions are similar to those used for a brow lift. Indeed, a mid-facelift performed in this manner can be done in conjunction with a brow lift.

The mid-face is re-positioned and the sagging cheek fat pad is lifted together with underlying muscles. This results in correction of hollowing below the eyes, sagging around the mouth, as well as improvement of the naso-labial folds.

Like a standard facelift, you should expect to wait at least several weeks until swelling has subsided for an accurate picture of how you will look.

BRA Day is an initiative designed to promote education, awareness and access for women who may wish to consider post-mastectomy breast reconstruction.

Only physicians who are certified in Plastic Surgery are Plastic Surgeons. There is no foolproof way to choose a Plastic Surgeon or to guarantee your results. However, there are a few basics, which can help you to decide.

The Canadian Society of Plastic Surgeons comprises nearly 500 Plastic Surgeons and is focused on sharing knowledge and expertise, improving quality of care, and advancing the practice of plastic surgery in Canada.

Find out more
©2023 The Canadian Society of Plastic Surgeons. All Rights Reserved