31 year old Anamais’s face and hands are dark and weather-worn, a product of 28 years as a “pescadoro”, fisherman on the Brazilian Amazon river. He is stocky and muscular, but his face carries the look of an abused puppy, scared and apprehensive. He enters the speech therapy area: his eyes darting left to right; his head hung as if in defeat.

Anamais knows he has missed official screening days, where patients go to the Operation Smile mission site in hopes of being selected for surgery for their facial deformities.

The fisherman is so disappointed that he missed the screening and sure we will not help him with the crevice that scars his upper lip. He lifts his head towards me, and I can get a full glimpse of his eternal embarrassment: a complete unilateral cleft, a facial crater that rips through his smile and extends through his soul.

“Tres veces”, he starts in Portuguese. “Three times, I have tried other missions in this city, and each time I was told that I was too old. I was told to come back again the next year, but they said no each year”. I am the speech pathologist and listen to his sad story as much to hear his life story as to learn what effect his deformity may have had on his speech.

Because his palate was not affected, his articulation is intelligible and only marred by difficulty pronouncing some words that have “p”, “b”, and “m”- bilabial sounds that require the lips to come together. He says he was not allowed schooling even though he had aspired to be a teacher.

He has worked all his life, or all the life he can remember since age three, on the docks and in the water. When he is out to sea, no one can crack jokes and anyway, at sea he has nowhere to hide. I ask if he is married and he buries his head, placing his hand over the shame he carries. No, he sighs, never. “Espero”…”I wish”, he says. His facial crevice is frightening to anyone who looks at him, and it has caused him a life of loneliness and left him without a “namorada”, girlfriend.

Kathy, medical records coordinator, is stationed in the hall. She holds the sacred schedules and records. Asked “what about the fisherman?, she grins, “We’ll make it work”, assuring that she has also heard his plight, and is giving the information to Jan, Clinical Coordinator, and person responsible for scheduling patients that week. Jan, in the pre-op area, is commanding the OR. She winks across the OR/ pre-op barrier. She has scheduled him, squeezing him in, last patient of the day. They will do the surgery under local anesthesia. Otherwise, there would be no time to do his case, as general anesthesia would take too long. 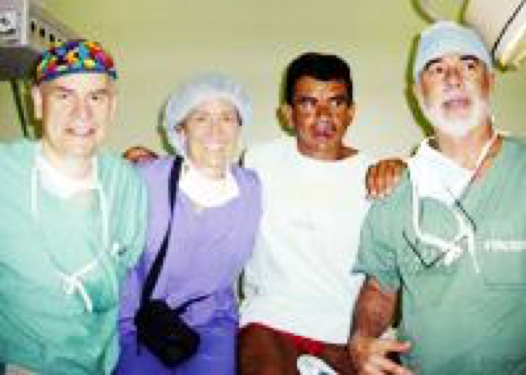 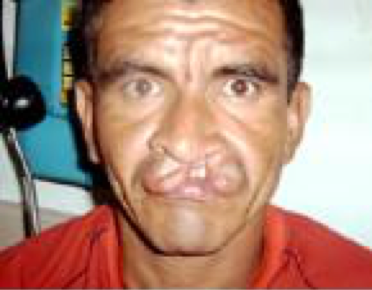 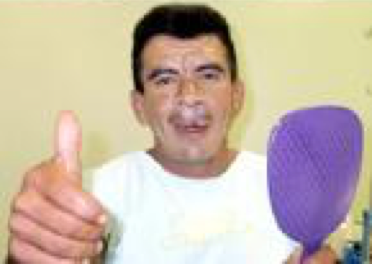 The fisherman is nervously fidgeting in his chair in the OR waiting area. They are calling his name for surgery, and he gives the “thumbs up” sign to indicate that he is ready. Surgery room #2 is daunting, but there is a friendly, almost festive atmosphere. There is a surgery beginning on the second table. Francesca, anesthesiologist from Italy, is starting to put another to sleep and speaks softly in her native language. Bolan, nurse from Finland, speaks English with a heavy accent, Brazilian nurse Rita, and Brooke from North Carolina begin the prep work. Ivan, dentist from Columbia, stands by at the next bed, ready to start extractions needed to make that patient’s smile. Rosana, Brazilian Operation Smile volunteer, and Jan are buzzing from room to room.

Don Lalonde, the plastic surgeon from Canada, has just scrubbed with Sergio, the Brazilian Plastic Surgeon who will assist him with the fisherman’s operation. Don, who is fluent in French and English, is conversing in Spanish and George, a native Portuguese speaker, can understand Spanish, too. I alternate between broken Portuguese and English, catching bits and pieces of the Spanish but none of the Italian or French.

I wonder what the poor fisherman thinks of this international endeavor, and hold his hands as they give him shots and wait for the anesthesia to take effect. As an adult, he is strong and brave enough to endure the pain of the injections needed all around his face in order to numb him properly. “Tell him this will hurt, very much”, Don says as he prepares to give him a series of shots to freeze the area around the nose and mouth. “Tell him I’m sorry this will hurt”, he adds thoughtfully.

Don takes a toothpick that has been broken in two in order to make it sharper, and dips it in ink. It is a proxy for a surgeon’s pen, but the substitute marker in this hospital. He begins to make marks all along the Fisherman’s lips. He is an architect, redesigning a flawed face. He is a master artist, his canvas is this countenance.

The procedure ends with nothing less than a miracle, and the surgeons are meticulous and take considerable time and effort, even in the last few stitches.

The fisherman sits up and anxiously takes the mirror handed to him. He glances at Don and George, at me, and at all the nurses standing there first, then slowly takes a glimpse at his new smile.

His eyes grow large, he smiles, and then looks again at us and give us all his big “thumbs up” sign. He holds fast to the mirror, and carefully touches what was once a mangled mouth, and now a handsome smile for a Fisherman’s face.

BRA Day is an initiative designed to promote education, awareness and access for women who may wish to consider post-mastectomy breast reconstruction.

Only physicians who are certified in Plastic Surgery are Plastic Surgeons. There is no foolproof way to choose a Plastic Surgeon or to guarantee your results. However, there are a few basics, which can help you to decide.

The Canadian Society of Plastic Surgeons comprises nearly 500 Plastic Surgeons and is focused on sharing knowledge and expertise, improving quality of care, and advancing the practice of plastic surgery in Canada.

Find out more
©2023 The Canadian Society of Plastic Surgeons. All Rights Reserved